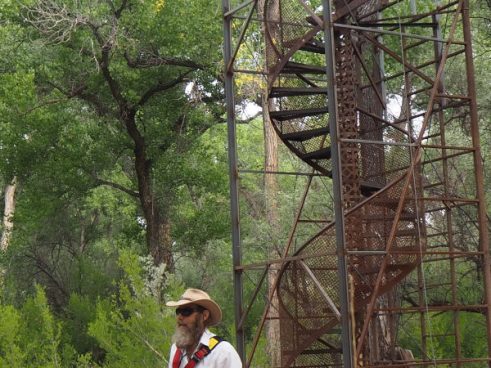 Here is a clip of the final moments of the tower raising. You can’t see the cables, but the jeep winch cable goes through a block anchored to the tree in front of the jeep (’56 Willys M38 A-1) and back to a cable system called a Spanish Burton (3:1) on the other side of the tower. The rope in the foreground that goes to the top of the tower, and takes a turn around the Russian olive at bottom right, I am holding to snub the motion of the tower as it tips the last bit under the force of gravity. The A-frame at the right is the derrick I built to get the thing up high enough for the cable system to get a good bite to lift it the rest of the way. For those of you who have not had the pleasure of listening to me talk about this for the last ten or twelve years, this tower (38′ 4″) will hold 6000 watts of solar panels up near the treetops. The spiral staircase was part of an opera set at the Santa Fe Opera. We will be putting up on the website a much more detailed little movie about the entire tower process. Stay tuned! 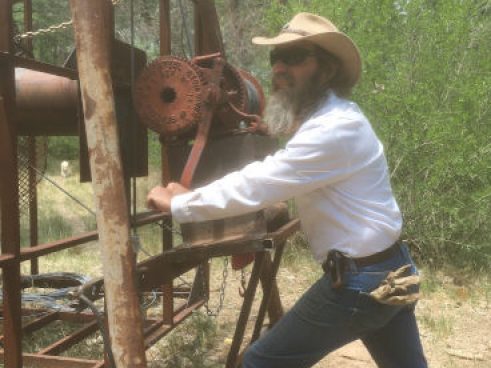 A metal tower (38′ 4″) with a spiral staircase will hold 6000 watts of solar panels up near the treetops. This video shows the first steps of creating the tower, first pouring a deep concrete footing and a slab. Then the spiral staircase and frame are reinforced and aligned on the ground. The tower is lifted off the ground using a derrick with a hand winch. Then the jeep (’56 Willys M38 A-1) winch does the heavy lifting at the end of the video with a cable system called a Spanish Burton (3:1 reduction), while Bob snubs the motion of the tower with a rope wrapped around the base of a large Russian Olive tree, and the tower tips the last bit under the force of gravity. 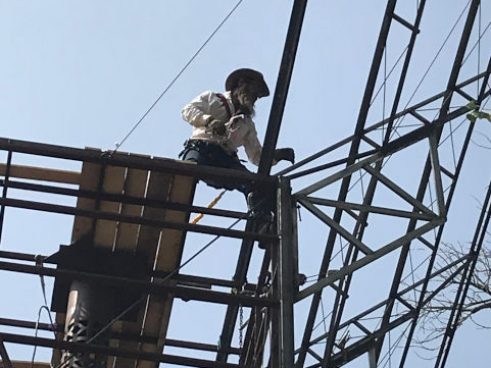 Here we are hoisting the first of two large solar panel holding racks into the air for placement on top of the 38’4″ tall sculptural metal tower.  This first rack mounts high and to the north, and the second one will mount lower on the south side.

As usual, we used the winch on the jeep (’56 Willys M38 A-1). The jeep winch cable goes through a block anchored at the base of the tower, up and over the north side of the tower, and pulls the rack up the south side. Each rack frame is 10 x 22 feet and will hold 12 photovoltaic panels. There will be two frames, for 24 panels altogether, totaling 6200 watts. One step closer to powering up. 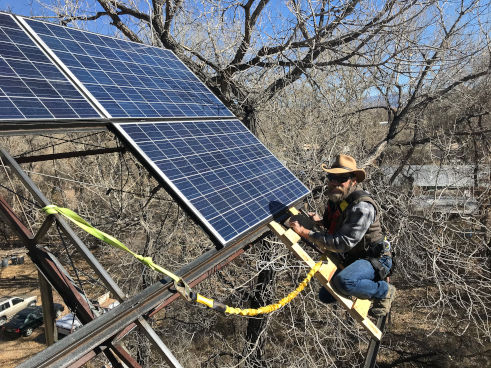 Here is the video you have all been asking for. How did you get the solar panels up to the top of that tower?

The activity required the use of a 2:1 block and tackle to haul each panel up, one at a time, with human muscle power. Once at the top, each panel was hefted into the frame, and attached with 4 bolts, which required some circus work: hanging from bat hooks under the panels, ladder scrambling, and plank walking. While working at the top of the tower, we wore climbing harnesses and clipped in to anchors for safety. There are 12 panels on each tower frame for a total of 24 panels; each panel measures about 3 x 5 feet and weighs about 40 pounds. 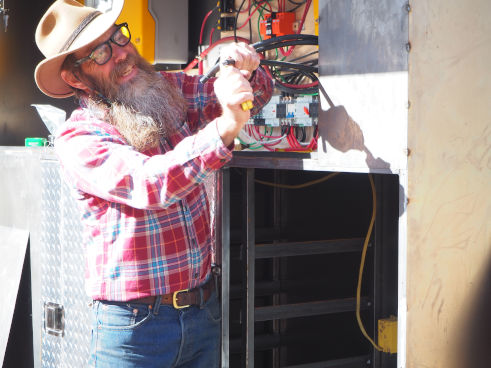 The Tower of Power has additional solar power equipment that needs to be connected together, including charge controllers, inverters, circuit breakers, and batteries. Bob built a “Power House” out of 18 gauge steel to contain these components. He designed the wiring layout and wired all the connections, installed the two yellow inverters (each weighs 130 pounds), the two charge controllers, and the four batteries (100+ pounds a piece) in the shop. The complete Power House weighed something around 1000 pounds. Here is a video summary of the process, including moving the completed unit, intact with batteries, out of the shop and to the base of the tower. Once in place, the main house wires were dug up, spliced, and connected to the Power House connectors. Then the wires from the solar panels were connected at the combiner box at the top of the tower, and the circuit breakers flipped on. With its two inverters, this system makes 240V, so we can run power tools. Solar Power, baby!